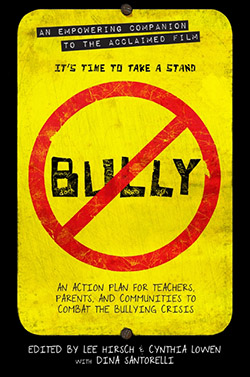 A companion to the acclaimed film BULLY, this book brings the story and mission of the documentary beyond the closing credits, continuing the national conversation inspired by the film.

Description: On the heels of the incredibly successful and conversation-generating documentary film BULLY, Weinstein Books is proud to publish the companion book, BULLY: An Action Plan for Teachers, Parents and Communities to Combat the Bullying Crisis.

The critically acclaimed film BULLY touched hearts, inspired a national conversation, and won critical acclaim for its stark portrayal of the bullying of children and teens in our nation’s schools. It also left viewers with a question: Now what? This empowering companion book answers that question, bringing the story of the documentary beyond the closing credits and offering inspiring personal anecdotes from the families featured in the film. Edited by the award- winning producers of the film, the book includes contributions from a wide array of experts and advocates in the field, such as US Congressman Mike Honda and child development specialist Dr. Robyn Silverman. Perhaps most importantly it offers practical, step-by-step advice for parents, teacher and community leaders to combat the bullying epidemic.

"A valuable resource that will help empower communities to deal with this deadly social plague."
- Kirkus Reviews